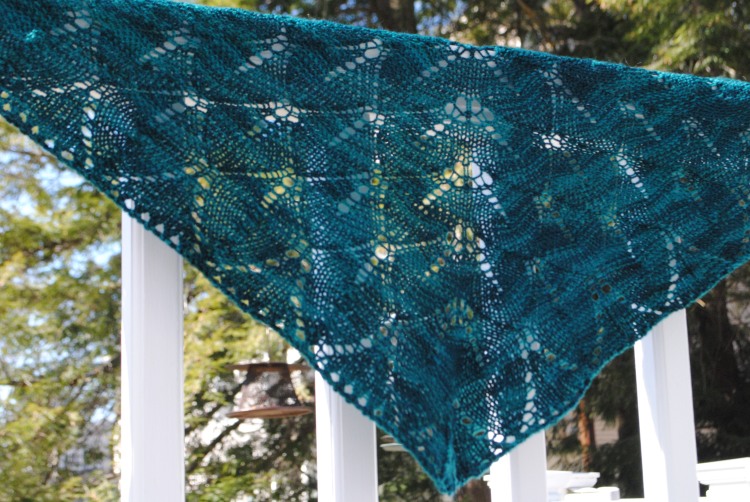 Finally, I’ve taken a few snaps of the Springtime Bandit, a triangular scarf I made for my Mum for her birthday this year.

The blocking came out perfect in my h.o.; I hate when lace looks overly stretched and even though I would have liked to get a bit more out of this guy to make that 382 yards of Shi Bui Sock go a bit further, I didn’t want to overstretch and lose the light, airiness of the lace. Because that’s the whole point of lace!

Fearing I did not have enough yardage (and I don’t think I did), I modified the lace border and created my own 10 row edge; it’s not nearly as beautiful as the original pattern, but it had to do as I didn’t want to search out one more skein of Shi Bui. Next time, I’ll work the entire lace edge chart, but I’ll have the appropriate yardage first. What’s more, I did six repeats of the body chart, rather than the four it called for, so there’s that to give it more oomph.

My mum adores it; the peacock colorway is perfect for her, and has inspired me to paint a peacock of sorts. More on that later…

I’m thinking I’ll need to reshoot the Springtime Bandit in the future; these snaps surely don’t do the colorway justice, but as always, more of them at its Flickr set.

You can also get some notes on my project, mods I made, and all that hoo at its Ravelry page.

The one upside to the snaps? The day I took to my mum’s back deck to snap away, the sun was beaming and the wind was lightly swaying…taking the lace away with it at certain moments.

File Under: A pretty excellent representation of the “Springtime Bandit” if you ask me….

One thought on “A springtime bandit in the wind…”