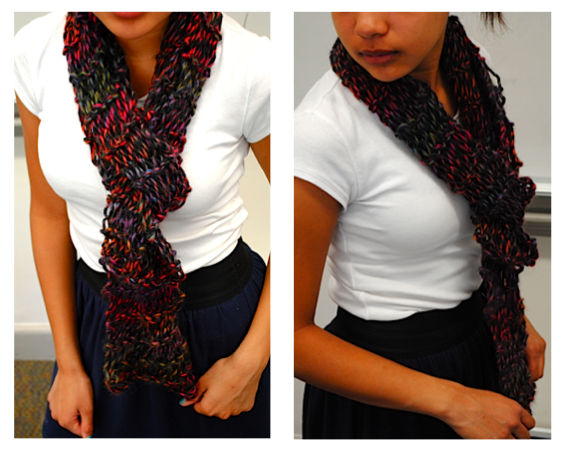 My knitters are whipping things up in a frenzy of late; I can attribute it partly to the skill that comes with practice, as well as the fact that we, remarkably, only have approximately 5 weeks left of schooling before summer break, and they’d like to take as much guidance with them before they are off for a few months.

And one of my 6th grade smarties has finished a brilliant Rowan Big Wool Scarf of her own creation, which I have dubbed the “Mick Rude Boy Remix”, because I know she likes her some Rihanna (as I do) and particularly “Rude Boy”, which I wish we had played during this lil’ photoshoot where she absolutely worked it out modeling her creation. Honestly, I should use her to model some of my stuffs–she is fierce!

But I added the bit about a remix, because she really mixed it up with this one–creating the scarf not only using an absolutely electric Rowan, but she used honkin size 50 needles! And having only learned to knit a couple of months ago, she really worked those needles like I’ve never seen (believe me, if you aren’t proficient in knitting, it can be overwhelmingly cumbersome to try and finagle those needles…if you don’t know what I mean, here’s what I’m talking about: the wowser.)

One of the upsides to knitting up Micki’s “Rude Boy Remix” is that it is super quick–I think she got this scarf done in less than a week, which is instant gratification, really!

Plus, it looks amazing on her with cute little skirts and tshirts and all that hoo–and with the giant holey scarf, you could pull it off all year.

More snaps, as always, at the Flickr set for the class.

File Under: Micki, I think Rihanna would work this, too. Golf claps!