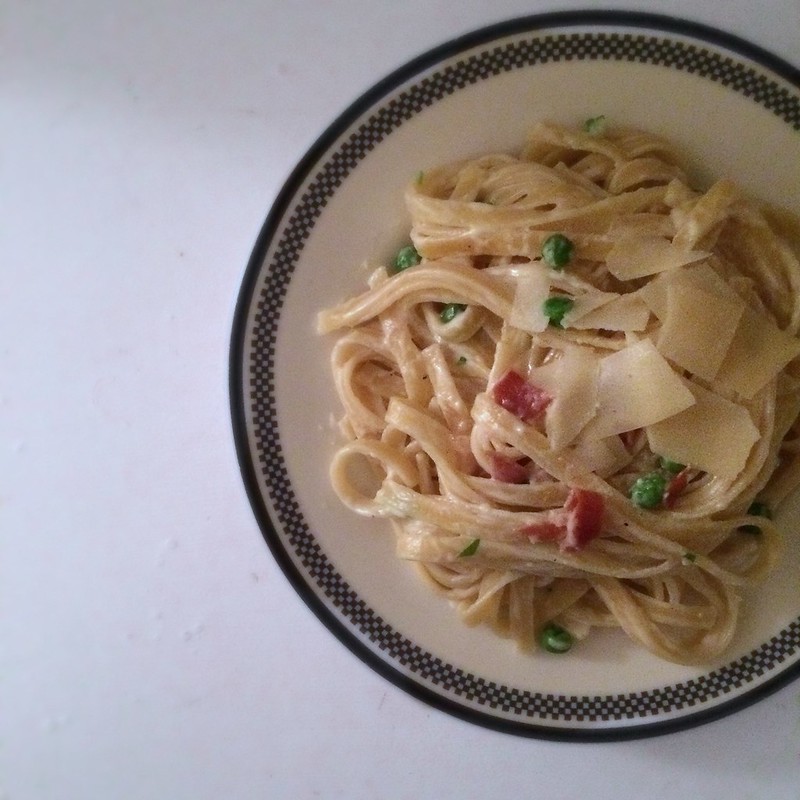 A quick meal whipped up last night with random ingredients I had in my fridge. I’m definitely one of those cooks that often creates wonder when not following a recipe, but a general concept, and bending it to what I have on hand. Going with the gut, that is! And I’m a cookbook gal. Sure, I look through tons of recipes online, but I think its ultimately harder to figure out what to cook. It’s overwhelming, at times.

So, instead of presenting you with some standard recipe, since I don’t usually post recipes, I’ll tell you what I did, in simple terms.

Sauteed some prosciutto di parma I had on hand from a leftover cheese plate until it was nice and crisp. Set aside. Made a parmesan cream sauce out of a dab of butter and a tbsp or two of flour (the roux), then about 1 cup of a combination of milk + heavy cream, then grated parmesan. Cooked up some fettuccine, then added the cream sauce, prosciutto, and some frozen peas (they cook really quickly in all the warm ingredients). For the top, just some shaved parmesan and Italian parsley.

Done. In under 30 minutes. My kind of weeknight cooking. What other combinations would work for a meal like this? Endless, it would seem…