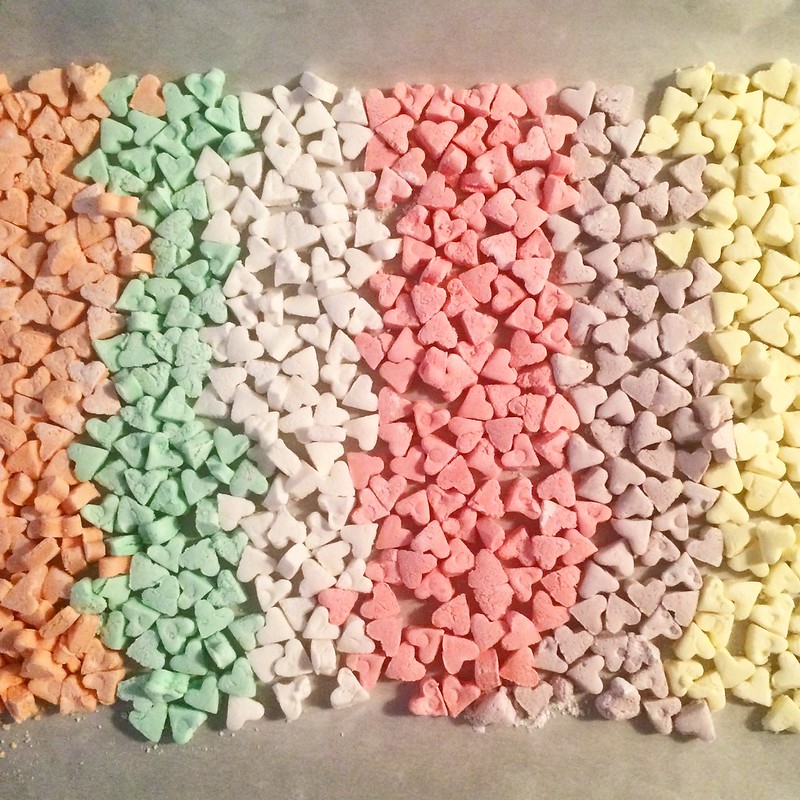 Yes, I actually did tackle making this hallmark Valentine’s Day candy by hand. Let me tell you, it was a lot of work. The upside? Customizing the flavors, colors, and sayings (though I have yet to write anything on these babies mainly because I was so sick o of working on them 1,000 tiny little hearts cut out later).

I followed this recipe from Serious Eats because it seemed like, with the addition of four ounces of Sprite, this baker had tested and tried and found an essential ingredient the others didn’t have. I don’t know if it made them better, but they came out the exact same texture as the conversation hearts in box we have come to either love or hate.

One important note: I had a lot of dough. I mean A LOT. It takes an entire bag of powdered sugar, basically, which is tons. I’d recommend halving this recipe should you choose to tackle it. I had so much dough and so many little hearts and so much anger by the end, I ultimately tossed a tiny bit of dough because I just couldn’t cut anymore of these out.

I’d like to get a dye pen and mark some custom messages on them, but really, that doesn’t seem like its happening at this point. I did however love that I could customize the flavors; I chose banana (which is my favorite, the flavor really came through and also lends itself really nicely to the chalky nature of conversation hearts), lemon, orange, coconut, and vanilla. I used extracts you can buy in the store and stayed away from peppermint or any mint flavorings because I thought when put in the same jar as the others, they would all taste like mint.

Have you ever tackled some ridiculous project like these? I’m glad I’ve made them and was really proud with how accurately my dyed dough came out, but next time, I’d say this is just one of those things that makes more sense to buy.